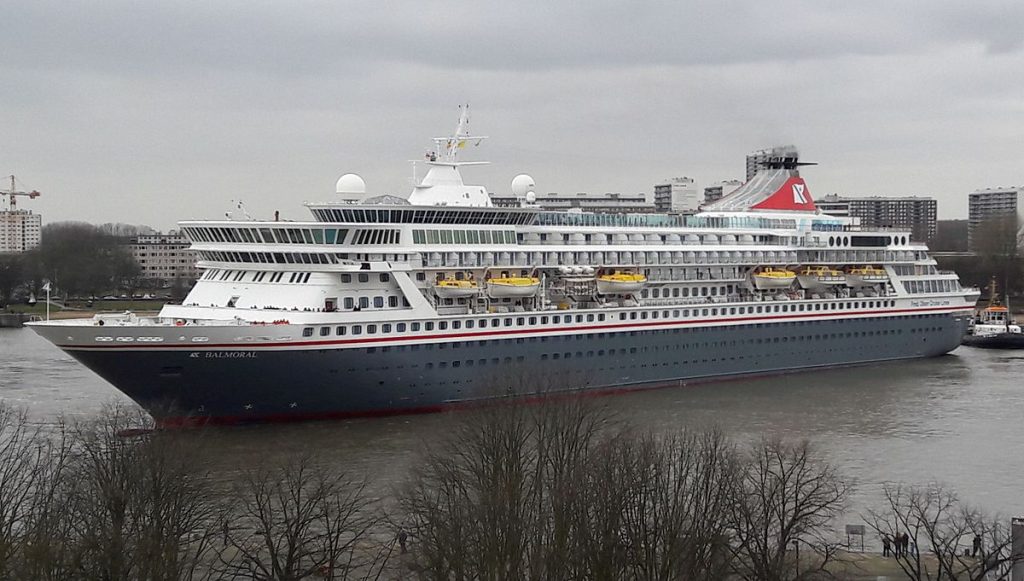 Fred. Olsen took delivery of the ship on 7 November 2007, renaming her after the Balmoral estate. The company initiated a major refit at the Blohm + Voss repair shipyard in Hamburg, Germany, before her inaugural cruise on 13 February 2008, to Florida—her base for Caribbean cruising. The work included the insertion of a 30 meter (99 ft) midsection, built in conjunction with Schichau Seebeckwerft in Bremerhaven, and floated into Hamburg at the end of October 2007.

The reconstruction added a further 186 passenger and 53 crew cabins, making the ship currently the company’s largest. It also introduced 60 new balconies, along with new and modified public areas, all designed to appeal particularly to the British cruise market.

A cruise ship currently owned and operated by Fred. Olsen Cruise Lines. She was built by Wärtsilä Helsinki Shipyard, Finland for Royal Viking Line as Royal Viking Star, entering service in 1972. She has also sailed for Norwegian Cruise Lines as Westward and Royal Cruise Line as Star Odyssey.

Royal Viking Line was established in 1970 as a joint project between the American businessman Warren Titus and three Norwegian shipping companies (including Kloster Cruises, the owner of Norwegian Cruise Line). The aim of the new company was to offer luxury cruises to destinations around the world as an alternative to Caribbean cruising. For this end the company ordered three purpose-built luxury cruise ships from Wärtsilä Helsinki New Shipyard in Finland. 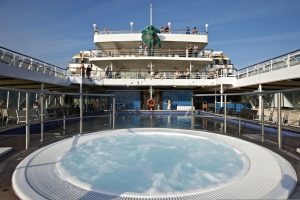 The first of the new ships, named Royal Viking Star, was launched on May 12, 1971 and entered service on June 26, 1972. Her sisters, Royal Viking Sky and Royal Viking Sea, followed in 1973. The Royal Viking Line brand was clearly a success and the elegantly furbished ships were considered to be amongst the five most luxurious cruise ships in the world at the time, alongside Norwegian America Line’s Sagafjord and Vistafjord. In 1981 the Royal Viking Star was lengthened by 27.77 metres at Seebeckwerft, Bremerhaven, Germany.

As the 1980s progressed it became clear that the luxury cruise lines such as Royal Viking could not survive without the support of a larger company, with the operating costs of a handful of luxury ships being too high to be truly profitable. Royal Viking Line was acquired by Kloster Cruises in 1984, but its operations were initially kept separate from those of Norwegian Cruise Line.

In April 1991 the Royal Viking Star was transferred from the Royal Viking Line to the Norwegian Cruise Line and renamed Westward. With NCL the ship was used for cruising from New York to Bermuda and on the Caribbean.In April 1994, the ship was transferred to the fleet of NCL’s subsidiary Royal Cruise Line, renamed Star Odyssey and used for cruising around the Mediterranean. Here the ship joined her sister Royal Viking Sea that had sailed as Royal Odyssey since 1991.The career of the Star Odyssey was to prove short however, as Norwegian Cruise Line was facing financial difficulties in the mid-1990s and were forced to sell off various assets. In October 1996 the ship was sold to Fred Olsen.

The ship was renamed Black Watch (a traditional name in Fred Olsen fleet) and entered service for Fred. Olsen Cruise Lines on 15 November 1996. In February 1997 the ship suffered engine problems while outside Marmaris, Turkey, and had to be docked for two weeks at Valletta, Malta for repairs. From April 2005 onwards, the ship was docked for two months at Blohm & Voss, Hamburg, Germany. During this time her engines were upgraded and interiors refurbished.

Boudicca is a cruise ship owned and operated by Fred. Olsen Cruise Lines. She was built in 1973 by Wärtsilä Helsinki Shipyard, Finland as Royal Viking Sky for Nordenfjeldske Dampsibsselskap, Trondheim, which placed the ship in Royal Viking Line service.

Prior to entering service with her current owners, the ship has also sailed under the names Sunward (for Norwegian Cruise Line), Birka Queen (with Birka Cruises), Golden Princess (with Princess Cruises), SuperStar Capricorn (with Star Cruises), Hyundai Keumgang

Following delivery to Kloster/Royal Viking the Royal Viking Sky was used for luxury cruises around the world. In 1982 she was lengthened from 177.70 metres (583 ft 0 in) to 205.47 metres (674 ft 1 in) at the A.G. Weser shipyard in Bremerhaven, West Germany. In 1984 Kloster Cruise acquired the entirety of Royal Viking Line. Subsequently in 1991 Royal Viking Sky was transferred to the fleet of Norwegian Cruise Line (also owned by Kloster) under the name Sunward. Already in 1992 the Sunward was sold to Birka Cruise, who renamed the ship Birka Queen for Baltic Sea cruising. Her career with Birka only lasted for the 1992 northern hemisphere summer season, and in late 1992 was chartered back to NCL, reverting to the name Sunward. In 1993 the ship was chartered to Princess Cruises, becoming their Golden Princess. Following delivery of newer tonnage to Princess Cruises, the company terminated the charter of the Golden Princess. Subsequently Birka Cruises sold the ship to Star Cruises, who renamed her SuperStar Capricorn. 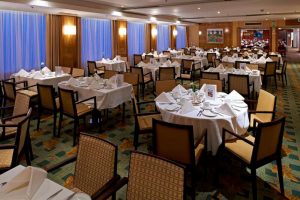 In March 2010, the ship was relocated to its new base in Liverpool where it has replaced the MV Black Prince, which was also owned by Fred. Olsen Cruise Lines.

The vessel was constructed in 1993 for Crown Cruise Line, operating under the name Crown Dynasty. Between 1993 and 1997, the vessel was also chartered by Cunard Line, which named the ship Cunard Crown Dynasty while under its flag.

The vessel returned to her original fleet and name in 1999, but was sold to Fred. Olsen Cruise Lines in 2001, where the vessel currently operates under the name Braemar. Her sister ship, originally named the Crown Jewel and now known as the MS Gemini,

is currently laid up in Tilbury Docks, UK, awaiting sale or charter.

When built, the ship had a gross tonnage of 19,089 but it was stretched to its present size by Fred Olsen Lines in 2009, the new middle section containing extra cabins, lounge space and swimming pools. 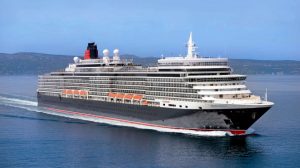 Queen Elizabeth is a Vista-class cruise ship operated by the Cunard Line. She is the second largest ship constructed for Cunard, exceeded only by Queen Mary 2, and is capable of carrying up to 2,092 passengers. The ship is running mate to Queen Victoria and Queen Mary 2.

Queen Elizabeth is a modified design and she is slightly larger than Queen Victoria, at 92,000, largely due to a more vertical stern.

Queen Elizabeth is almost identical in design to the Queen Victoria, although because of the steeper stern, her passenger capacity is slightly higher (2,058 to Queen Victoria’s 2,014).

Also unlike many previous Cunard Queens, Queen Elizabeth is not a true ocean liner as she does not have the heavy plating throughout the hull nor the propulsion system of a dedicated transatlantic liner. However the bow was constructed with heavier plating to cope with the Transatlantic run, and the ship has a high freeboard. During construction Queen Mary 2 had cost approximately $300,000 US per berth, nearly double that of many contemporary cruise ships, so Cunard made the economical decision to base Queen Elizabeth on an enhanced Vista-class cruise ship.

(QV) is a cruise ship operated by the Cunard Line, and is named after the late British monarch, Queen Victoria.

Queen Victoria is the running mate to Queen Mary 2 and Queen Elizabeth.

Until November 2008, she also operated alongside Queen Elizabeth 2.

Queen Victoria is of the same basic design as other Vista-class cruise ships, though slightly longer and more in keeping with Cunard’s interior style. At 90,000 GT, she is the smallest of Cunard’s ships in operation.

Originally destined to be an addition to the Holland America Line fleet, the order for a Vista-class vessel put into Fincantieri was soon transferred by Carnival Corporation & plc (parent company to Holland America, Cunard, and P&O) to Cunard with the intent that the vessel would become the MS Queen Victoria. The keel was laid down at the Fincantieri ship yard in 2003. However, due to restructuring within Carnival Corp., as well as a later decision by Cunard that modifications should be made to the design to bring in certain aspects which had proven successful on the Queen Mary 2 (such as decor, junior suites, dining alternatives, promenades, etc.), the hull was then designated to become the P&O ship MS Arcadia. A new Queen Victoria was subsequently ordered with Fincantieri in 2004, which was 11 meters longer, 5,000 tons larger, and with an increased passenger capacity of 2,000. 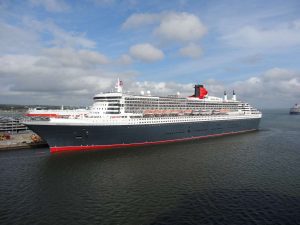 The Queen Mary 2 (also referred to as the QM2) is a transatlantic ocean liner. She is the only major ocean liner built for Cunard Line since Queen Elizabeth 2 in 1969, the vessel she succeeded as flagship of the Cunard Line.

The new ship was named Queen Mary 2 by Queen Elizabeth II in 2004 after the first 1936 namesake ship RMS Queen Mary. Queen Mary was in turn named after Mary of Teck, consort of King George V. With the retirement of Queen Elizabeth 2 in 2008, Queen Mary 2 is the only transatlantic ocean liner in line service between Southampton and New York, which operates for part of each year. The ship is also used for cruising, including an annual world cruise.

Queen Mary 2 was intended for routine crossings of the Atlantic Ocean, and was therefore designed differently from many other passenger ships. The ship’s final cost was approximately $300,000 US per berth. Expenses were increased by the high quality of materials, and having been designed as an ocean liner, she required 40% more steel than a standard cruise ship. Queen Mary 2 has a maximum speed of just over 30 knots (56 km/h; 35 mph) and a cruising speed of 26 knots (48 km/h; 30 mph), much faster than a contemporary cruise ship. Instead of the diesel-electric configuration found on many ships, Queen Mary 2 uses integrated electric propulsion to achieve her top speed. This uses gas turbines to augment the power generated from the ship’s diesels.

Queen Mary 2‍ ’​s facilities include fifteen restaurants and bars, five swimming pools, a casino, a ballroom, a theatre, and the first planetarium at sea. There are also kennels and a nursery on board. 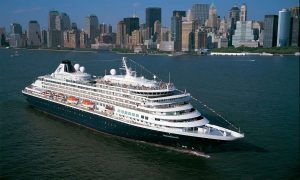 MS Prinsendam (formerly Seabourn Sun and Royal Viking Sun) is a cruise ship for Holland America Line and is nicknamed the Elegant Explorer. She was launched in 1988 as Royal Viking Sun for the Royal Viking Line, and was renamed “Seabourn Sun” when Seabourn Cruise Line acquired the ship in 1999. Shortly after, in 2002, Seabourn wished to concentrate on smaller vessels. So, in 2002, they transferred the ship to Holland America Line, where she was renamed the Prinsendam. 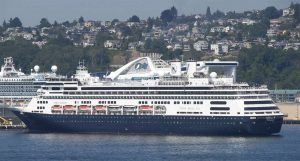 MS Amsterdam is a cruise ship owned and operated by Holland America Line, named for the city of Amsterdam, capital of the Netherlands. She is the fourth and last ship of the Rotterdam class (R class), which includes MS Rotterdam, MS Volendam, and MS Zaandam. She was co-flagship of the line along with her sister ship MS Rotterdam.

As with Rotterdam, Amsterdam features a multi-million dollar art collection. This includes a three-story, fully functional Astrolabe in the main atrium which took over 15 years to design.

During the summer, Amsterdam sails around Alaska; during the winter, she makes grand voyages around Asia, Australia/New Zealand & South Pacific. She also sails an around-the-world grand voyage round-trip from Ft. Lauderdale, Florida.